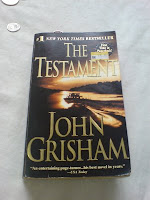 The Testament-a much controversial work of Grisham.

Well, much has been said ‘bout Grisham, the author of The Testament. Yet, I don’t understand why I keep turning page by page reading his work. Addicted? I can’t find another suitable word. And this story, fiction as usual, had never bored me with another side of lawyerly thing that is will and probate.

The story start with Troy Phelan, a multi-billionaire, had jumped from his Tower, seconds after passed his mental capacity test, by three expert shrinks, Dr. Zadel, Dr. Flowe and Dr. Theishen and sign his will. Left behind are some eleven billion dollar estate and hungry 3 ex-wives and 6 spoiled heirs. Troy, as while he is alive, a very lousy husband, father and employer had made his life ended so dramatic by leaving his fortune to Racheal Lane, the unknown illegitimate daughter.

Josh Stafford, his lawyer’s biggest quest now is to track Racheal Lane, a Christian missionary for Tribe World somewhere in deep Brazil swamp. And he thinks no other than Nate O’Riley, his partner who had been in rehab center for boozer to find the missing heir. The journey concurs most of the story physically as well as spiritually. The danger of swamp during raining season, the plane crash, the wreck of the boat by the storm, lost in the middle of nowhere and being infected by malaria and dengue fever had been narrated beautifully as we might feel being there.

And Nate’s meeting with Racheal in Ipica’s settlement had made him somehow find his fresh way, i.e praying to God, simple life and she didn’t even care for the money. The story goes on and on back to the States where the trial was presided by Judge Wycliff and everything turns ugly when all cards are open on the table. Nate finding his new light had befriended Father Phil in St. Michael and accept that he can’t change his past (his broken family) but put his faith that God will show the way forward.

The story ended with settlement between the heirs of some fifty million dollar each and the death of Racheal, the richest woman somewhere in Pantanal. Well, it is not only a story on legal field but I do think that Grisham had included something about Christian teaching in this book. I mean, how they understand the concept of praying and leaving all matters to God and, how dedicated they are in converting the aborigines. As I do my reading in the office, mind you this is my second time, both at Yadim years back and my current office, people keep telling me, “Encik, hati2 baca buku mcm ni, nanti terpesong akidah.” Well, this is nothing to do with New Testament or Old Testament (Taurah I belief), but Grisham only refer it to The Last Will and Testament of both Troy Phelan and Racheal Lane.
Posted by ajako at 3/16/2009