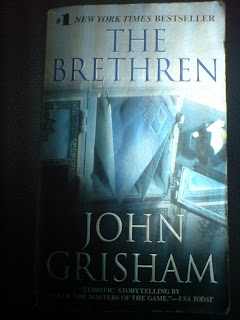 Ever imagine how a group of former judges doing time in Trumble, a Florida federal prison. The three had formed a kind of bond, both as a court officer in the prison and a brotherhood of illegal activity, called as the Brethren. Joe Roy Spicer, Finn Yarber and Hatlee Beech had formed some kind of scam and extortion behind a young and handsome gay character of Percy and Ricky and targeted all kind of lonely chap around the nation. They befriended them, lured them with a sad story of young Percy and Ricky who are in the rehab centre and desperately needed an adult companionship after get out. However, one day their hook catch a big fish, Mr. Aaron Lake the Congressman of Arizona, Mr. President to be.

Lake, becomes the most suitable candidate for the next President had caught the attention of CIA who think nothing but to increase the national budget on defense. Then all the CIA jobs come in both in securing Lake’s campaign and his little secret with Ricky. Grisham once again never fail to impress me on how meticulous he is in describing presidential election campaign.

CIA, under the command of Teddy Maynard had managed the camp for Lake’s campaign called DPAC and the later keep winning in each states leaving behind Senator Britt of Maryland with his exhausted fund. And at the same time, the agency had made a little chaos back in Cairo, just to assure that the world really needs a strong American army to secure its citizen and eradicate terrorist. From here the name of Natli Chenkov of Russia emerged.

On the other side of the world, Teddy had ordered his man to track down who is this Ricky. And CIA managed to strike a deal with Trevor Carson, the drunken lawyer for the Brethren. However, the lawyer had double crossed the agency and fled to Bahamas and later found death with the bullet behind his head. The Brethren had loss their only messenger and rely hardly on Buster, young inmate of drug case to runaway from Tremble with a note to Aaron Lake. But as usual, the agency managed to intercept the letter and send Wilson Argrow, CIA agent in Trumble just to confront the pack of disgraced former judges. Teddy managed to sought the Clemency- a pardon by the president to special inmates for the three and send them abroad with $2 mil each in their hand.

The story ends with Teddy once again safe the day by reminding Lake, the now elected President that he has Ricky’s file and ask the President to live a normal life. Marry Jayne Cordell one of his staff and no more double life. Ricky had been neutralized, as what the agency good at.

However interesting the story been written by the author, I still feel some discomfort especially on how he describe terrorism. Minor issue as he may assume, but relating third world countries with terrorism is lame. For instance, page 19, mentioned to the effect:
"They swapping oil for Israeli Radar. They’re trafficking in drugs and buying Chinese tanks through Pakistan. Chenkov has close ties with some mobsters, one of whom recently bought a factory in Malaysia where they make nothing but assault rifles… "
To be frank, this is the second time I read the Brethren and find it quite good especially on its pace but the CIA jobs make me feel disdain. What a shame for the so called great country like USA.
Posted by ajako at 2/10/2009