ai dontch-main - corruption of "I don't mind" - the extraneous syllable 'ch' indicates that the speaker is well aware of the subtleties of the English language and is making an effort to sound the 't' in "don't."

aisayman - contraction of "I say, man!" A totally meaningless utterance, most commonly used by those with absolutely nothing to say. 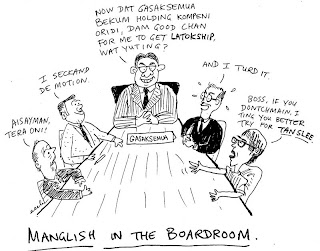 ai sked (lah) - confession of nervousness, as in "I'm scared, don't have the guts to do it."

ai so dono - expression of ignorance, probably imported from India, originally: "I also don't know" (polite variation of "Damned if I know!"). 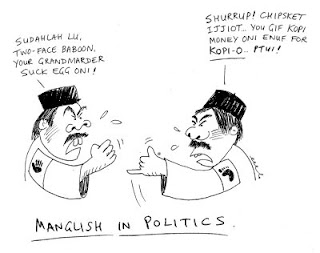 baiwanfriwan - ploy used mainly by Chinese shop assistants to promote sales: "If you buy one, you'll get one free!"

barsket - uncouth interjection; term of derision, often preceded by the prefix "bladi." Probably a mangled compound of "blasted," "bastard" and "bugger." An all-purpose expression of acute annoyance, as in "Goddamn" or "Blast it!"

beteyudon - mild warning, as in "You'd better not do that."

chipsket - contraction of "cheapskate," somebody not known to be generous; also used to describe anything low-cost.

dai-lah - term of commiseration, usually mock, used in situations where an element of anxiety is present, e.g.,"Oh dear, now you've blown it!" or "Oh well, that's the end of that!" or "Shit! I'm in real trouble." 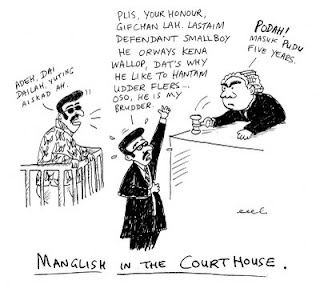 de-bladi-garmen - contraction of "the bloody government" - widely used scapegoat for all of life's disappointments, delays, denials, and prohibitions.

defler - contraction of "that fellow."(don) tokkok) - playful insult ("Don't talk rubbish!"); the etymology of tokkok is uncertain but it probably derives from "talk cock" (as in "cock and bull" stories).fler - personal and/or impersonal reference, originally a contraction of "fellow" but frequently applied in neuter gender, e.g., "You flers better wochaut!" ("Don't any of you try to be funny!")fraskes - noun applied to any individual caught in an unenviable impasse; someone whose case is frustrating; could also imply sexual deprivation.

gifchan (lah) - half-serious plea, as in "Give us a chance, will you?" Could also mean: "Please do us a favour."

hauken - another elastic expression applicable in almost any situation, e.g., "That's not right!" or "Impossible!" or "You don't say!"

izit - expression of mild unbelief: "Is that so?"

izzenit - from "isn't it?" but applied very loosely at the end of any particular statement to elicit an immediate response, e.g., "Yused you will spen me a beer, izzenit?"

kenoso - affirmative, "can also"; in other words, "It's quite all right with me" (see osoken).

las-taim - denotes the past ("last time"), though not necessarily in any specific sense: e.g., "Las-taim we orways see filim but nowadays stay home and watch dividi oni."

wan-kain (wan) - adjective denoting uniqueness, oddness, weirdness, extraordinariness; contraction of "one of a kind" (with "one" repeated for rhythmic symmetry); sometimes rendered as wan-kain oni (to emphasise the uniqueness).

watudu - rhetorical question ("Ah well, what can we do?" or "That's the way the cookie crumbles!")

wehyu-attash - polite question when introduced to a stranger ("Where are you attached?" or "What do you do for a living?")

yalah - noncommittal agreement, liberally used when confronted with a bore. A string of yalahs issuing from your hapless listener is a sure sign that he or she wishes to terminate the conversation as soon as possible.

yesah - general expression of interest, usually inserted as a polite question during conversations, as in "Oh, really?"yu-a-yu - term of friendly accusation, meaning "You're too much!"