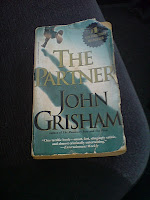 "The Partner"-To Grisham or not to Grisham

The topic of having a second life becoming so popular nowadays. So was Grisham in his another brilliant work, The Partner. Patrick Lanigan, a young partner who're about to be sacked by the firm. It's only a matter of chance when he found out the little secret of the partners. Together with the evidence, Patrick had change his identity and flight for his second life, the one he longed for. Grisham had plotted the story amazingly and full of detail. The craziest, I'm obliged to admit, the plot start with falsified death, the vanishing money of the firm, the hunt over Brazil and lastly the capture of Patrick.

But Grisham went futher with the beautiful Eva, Patrick's partner. Together with their lawyer, Sandy, Patrick managed to buy his freedom and walk his way out casually from the authority. Blame the system, and the clown of course, where crime could be justified in a certain way. Patrick had offered to disclose a huge scandal regarding false claim in navy industry. The scandal which named a senator, some very big insurance companies and real player of ex FBI.