The Summons by John Grisham 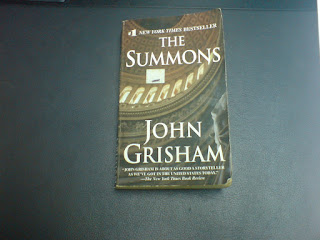 The Summons- a summary

Imagine if you find $3.1 mil. in the desk cabinet of your deceased father, who you barely talked to for years. That’s what happen to Ray Atlee, elder son to Chancellor Reuben V. Atlee, the judge at Clanton, Mississippi. Judge Atlee at his end of his life had issued summons for his two sons to return to Clanton to discuss his estate. But the family meeting does not take place. The judge dies too soon, and in doing so leaves behind a shocking secret known only to Ray, and perhaps someone else.

Ray, a professor of law at Virginia University live a simple life, freshly divorced, who jogged 5 miles a day and enjoy flying his chartered Cessna on the weekend. Once he discovered about the cash, he don’t know what to do or what to plan, had keep the money with him, almost everywhere in his car booth. The quest to know where the money comes from is the heart of the story. Ray had tested it in the casino, the Bureau of Engraving and Printing, and IRS but all leads to dead end. Until on one day, he found a mysterious case file showing that the judge had presided a tort case against a giant pharmaceutical company from Europe, Gibson v. Miyer-Brack, to be exact. Patton French, the then lawyer for the plaintiff had won the case and it becomes a mass tort worth billions dollars of compensation against a bad drug called Ryax.

French become so rich and popular by then and feel grateful to the judge. He just drop the cash in front of the judge’s porch as a token of appreciation, and at that time the later was so sick to even check on it. Ray’s life is actually no better with that money. He could not sleep at night and live his normal life, keep looking on his back every time he drove his cute Audi TT as the cash were in the bonnet. And it lasted in the night a phone call asking him to return the money to the cabinet he found it and fled away. It comes to the surprise that his old house, Maple Run burned down by the one who chased him for weeks in that very same night.

Together with his old lawyer friend, Harry Rex Vonner, they’re confused who actually the mob is and where the money goes. The answer comes quick and simple. It’s all his little brother, Forrest, who came to visit the judge sometimes before his death. He is the one who found the money first but too scared to think on what to do with it. He is the one who wrote the will and the summon. And when he found it later that Ray had run with the money, he asked his fellow jail inmates to intimidate his own brother. Now, he is in a rehab centre and Ray manages to see him. Grisham ends his work beautifully with the fight between the brothers. What a man will do with the money he found, is there any exception to the rule on brotherhood ties, and most important thing is, why we always think that we’re the better person to guard the money compared to others. What a story, right?

Comment- this is the third time I read this book, and to the surprise, I never hesitate to turn to the next page. Anyway, to John Grisham fan, the pace and plot is identical, a little bit slow at the beginning but full with details, just to show how good writer he is. As in this case, the way he describe the funeral procession. But as the plot goes, so the excitements risen.

The Judge was still dead when Ray returned to his study, and that was not a complete surprise.
Ray was a little dazed by the torrent of advice, but was thankful nonetheless.

Moral of the story: To many, the principle that money can’t buy everything, but it makes the world go round, makes some sense in this book.
Posted by ajako at 1/28/2009